This elegant recipe for pork medallions with buttered mustard sauce looks fancy but is so simple to make! Tender pork and a creamy, tangy sauce make for a perfect dinner.

So I’m just going to put it right out there that pork and I have a tumultuous relationship.

I love making and devouring it when it comes out all tender and well-behaved, but I am famous for taking a perfectly innocent pork chop and turning into, well, rubber.

So I have made it MY MISSION to win the pork battle, and I’ve figured out three different ways!

One is ground pork. When it is ground into submission (by the grocery store, not me!) I have no problems cooking it up into things like my friend Jaden’s pork dumplings.

The second? The slow cooker. Nothing stands a chance against the slow cooker. Anything you put in there to cook low and slow for hours is going to surrender into something fabulous. EVEN PORK.

And last but not least, the pork tenderloin.

What is a pork tenderloin?

Pork tenderloin (not to be confused with pork loin, and I already know that is all kinds of confusing but here’s some handy info) is a long, thin strip of pork that is one of the leanest and most tender cuts of pork.

I have finally figured out that if I get ahold of a pork tenderloin, which cooks up quickly without drying out, even I can come up with a pretty dang good pork supper that is equally good for regular weeknights as well as fancy dinner parties.

Side note: speaking of dinner parties, check out who dropped in on my friend Janet the other day. This is her back yard…

…and those are The Three Bears. I guess looking for either porridge or a pork supper.

The cubs are all kinds of adorable, but their mama looks a little cranky.

She is the one on the left, and when I saw this I said a fervent prayer that Janet was using some sort of a powerful zoom lens from far far away.

Meantime back at the recipe, while you can definitely roast it, I like to get super fancy (and also save some cooking time) and make pork medallions!

What is a medallion of pork?

Pork medallions are round circles of pork tenderloin that you make by simply cutting your tenderloin into 1 inch slices. Fancy-sounding but super easy!

That way you can sauté them up quickly in a pan…and in this case use that same pan to make a lovely little sauce to go with them.

Here’s how to make Pork Medallions with Buttered Mustard Sauce

After you have cleverly cut up your pork tenderloin into a bunch of medallions, heat up a couple of tablespoons of canola oil in a large skillet over medium high heat.

Sprinkle your pork with a little sea salt and pepper and cook them in the skillet for 3 minutes per side.

It’s super important for pork to cook all the way through, so I like to give it a quick check with my meat thermometer to make sure it is at 145 degrees. Then I scoop it out, pop it on a plate and cover it with foil.

Now for the sauce! Put a couple tablespoons each of butter and mustard (I like Dijon mustard for this recipe) in that same pan and give it a whisking until the butter is melted.

Whisk in a half cup of chicken broth, a tablespoon of flour and some chopped fresh thyme and simmer it just until it starts to thicken.

Now pop those pork medallions back into the skillet (if there are any juices on the plate pour those in too), turn them a few times until they are nicely coated with sauce, and give the sauce a quick taste to see if it needs any more salt or pepper.

All that’s left to do now is divide your fancy pork medallions among plates, pour a little sauce on top, and serve it up! 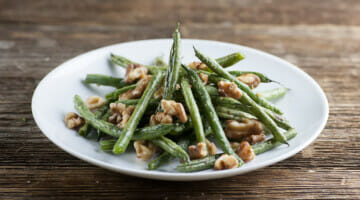 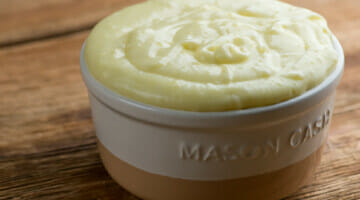 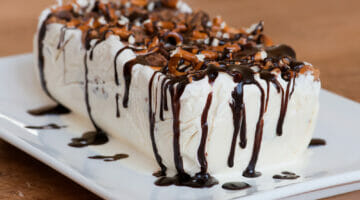 This elegant recipe for pork medallions with buttered mustard sauce looks fancy but is so simple to make! Tender pork and a creamy, tangy sauce make for a perfect dinner.