PIN this recipe for Bacon and Egg Baked Potatoes now…so you can make it later!

Breakfast, lunch or dinner – this recipe for bacon and egg baked potatoes is perfect for any of them! Full of your favorite flavors and oh so satisfying. 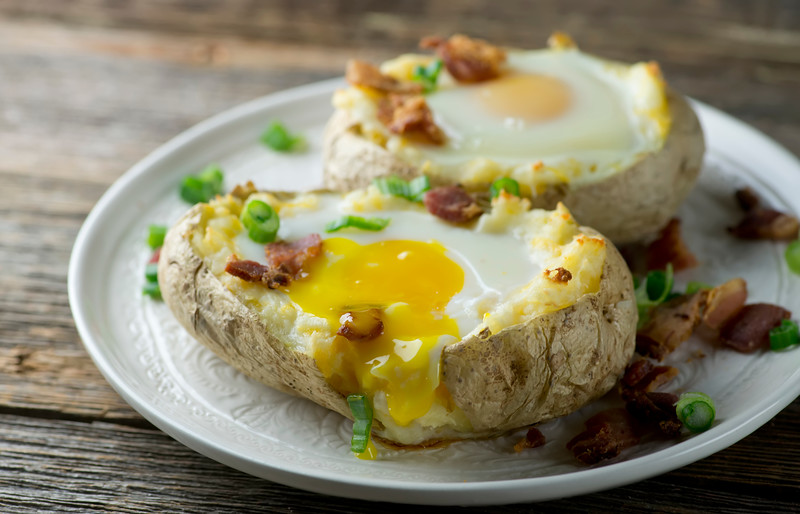 There are so many things to love about bacon and egg baked potatoes.

Obviously the creamy egg that cooks in the potato.

But not so obviously, the fabulous fact that you scoop out the potato insides, mash them up with some butter and milk and salt and pepper and smush just enough of them back into the potato to make a nice little bed for your egg to cook in.

And that means that each bite is full of egg and bacon and mashed potato.  Boom.

Here’s how you make bacon and egg baked potatoes!

You start with as many baked potatoes as you have people, and I will state for the record right now that I am a firm believer of making baked potatoes in the microwave.

Give them a few jabs with a fork to get some steam holes going and about 8 minutes later your potato is as cooked and tender as if you spent an hour or so waiting for it to do the same thing in the oven.

I have conducted much scientific research comparing the two, and I am here to tell you that you can have that 52 minutes of your life back.  Microwaves and potatoes are meant to go together.

Once your potato is cool enough to handle, cut it in half lengthwise and carefully scoop out the insides.

Mash it together with a little butter and milk, and if you are feeling particularly decadent, a spoonful of cream cheese.

Now put enough of the mashed potato mixture back into the potato shell to fill it up around the sides and about halfway up the bottom.  You want to leave enough room for your egg to have a nice cozy next.

Pop the potatos onto a baking sheet and carefully break an egg into each one.

Try and keep the yolk whole, as this will make for maximum creamy egg wonderfulness when you are done.

Bake them for about 20 minutes, and in the meantime cook up some chopped bacon and slice up a few scallions.

When the eggs are soft-set, plate them up, scatter them with bacon and scallions, and serve ’em up. 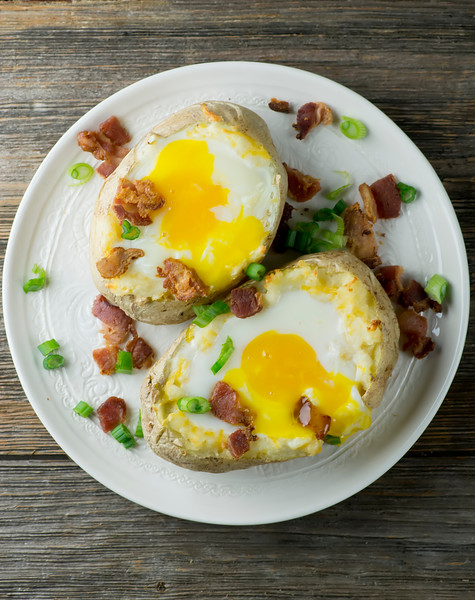 One half of a potato with a salad is a lovely light dinner.

Or we could just go ahead and eat both halves and eat salad tomorrow.

Breakfast, lunch or dinner – this recipe for bacon and egg baked potatoes is perfect for any of them! Full of your favorite flavors and oh so satisfying.

Need to add something to your kitchen equipment to make this recipe? Below are some of the items we used in the Framed Cooks kitchen to help cook this up. These are affiliate links to things we use and love, which helps to pay for all that bacon I keep buying!pota