I seem to be all about the bananas lately.  Banana pancakes, banana cake and now this warm and wonderful cross between a banana coffee cake and banana bread, which cooks up in a skillet for extra coziness.

There’s something about things cooked in skillets that has me at hello.  From spaghetti and meatballs to whole chickens to buttered corn, if it cooks up in a skillet, I’m in.

A word about my skillet.  It’s a somewhat battered old guy, and I have no idea what brand it is.  It feels like it wants to be a Le Crueset, but it has no identifying marks so I can’t vouch for that at all.

It’s a kind of unfortunate burnt orange color, and I literally have no memory of where I got it…that’s how long I’ve had it.

All that being said, it’s my go-to skillet for whenever I need a skillet that can stand up to deep frying or being put in the oven or any other similar kind of skillet heavy lifting.

It’s definitely heavy, I’ll say that.  And that’s the kind of skillet you want for this recipe…one that is sturdy and reliable and oven-safe. 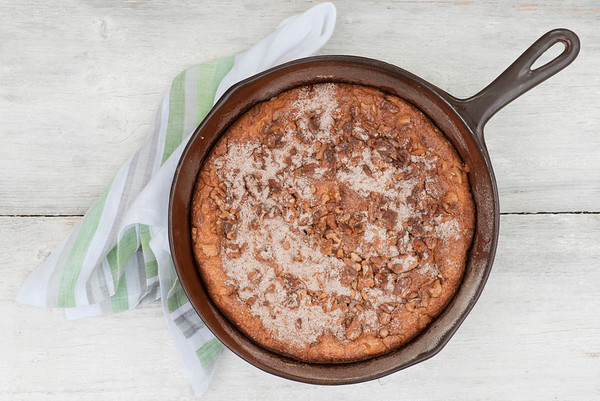 The batter for this scrumptious banana concoction is a mixture of cream cheese and butter, brown sugar and eggs, flour and sour cream and vanilla and a few other things, all topped with a mixture of cinnamon sugar and walnuts.

And bananas!  All of this gets mixed together, spooned into your friendly skillet, and popped in the oven until it is nice and golden and your kitchen smells like cinnamon and bananas and heaven.

And of course, you serve it right from the skillet.  Warm. 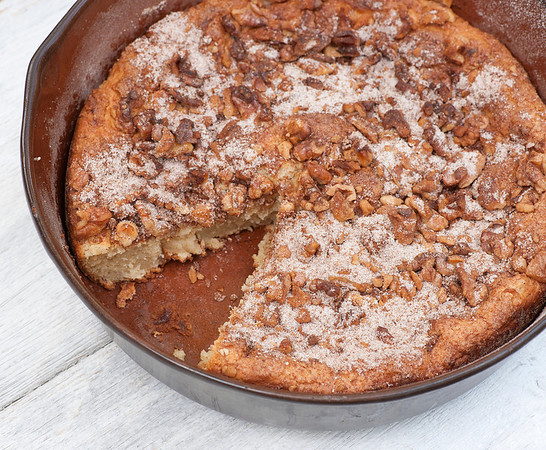