Your favorite campfire dessert, in cookie form! This easy recipe for S’mores cookies bakes up in your oven for some marshmallow chocolate deliciousness! 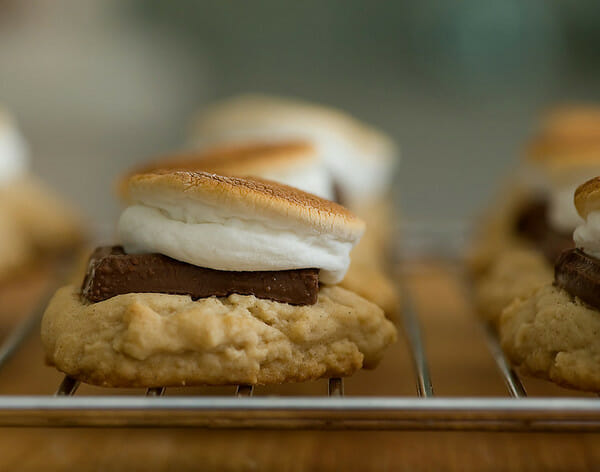 I am a bit of a fanatic when it comes to s’mores. I have tried s’mores ice cream, s’mores fondue, bacon s’mores and s’mores candy bars, and I love ’em all.

The best “traditional” s’mores I have ever had were with our dear friends up at their Connecticut lake house — a real campfire at night. I think we used actual sticks to roast our marshmallows, and we laughed our heads off.

I think it was the company that made my memory of the s’mores so amazing…but I’m sure the chocolate/marshmallows/graham crackers were pretty dang good too.

In any event, I was pretty hopped up about making these s’more cookies, although I have to say I was just a tiny bit skeptical about the whole thing hanging together (as in visions of melted chocolate all over the inside of my oven).

But the lure of the potential s’more cookie was too much for me to handle, so I gave it a go.

The bottom cookie part is actually a dough made of the usual flour, sugar, butter, etc — and ground oatmeal with cinnamon. So it is a little sweet and crumbly, yum yum yum.   The chocolate (I used Hershey squares, natch) was soft but held its shape just fine. (Phew.) 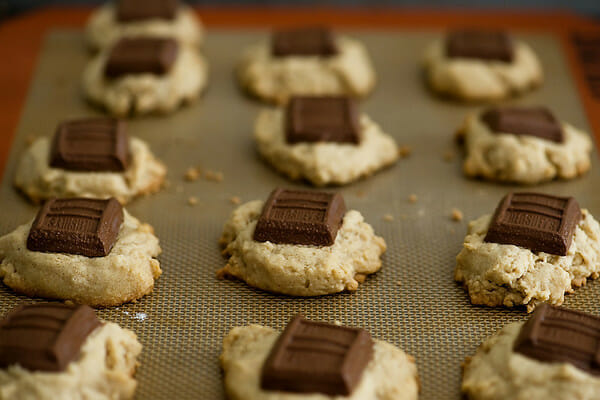 See? That is the tray after the baking, and those little chocolate squares are holding up bravely.

Next, you top each on with half a marshmallow and run them under the broiler for about one minute.  Keep a weather eye on them.

One minute those marshmallows are as white as snow, and the next minute you are running around like a crazy person trying to remember where you put the potholders. 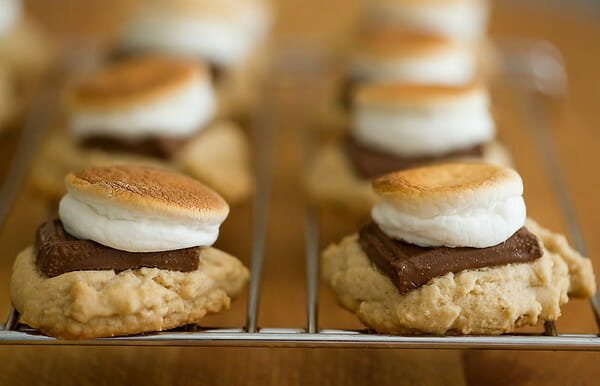 These little goodies are AWESOME about 5 minutes out of the oven, but they are also great once they have totally cooked. The marshmallow goes from runny and creamy to a little chewy — but the taste still makes you say, let’s have s’more.

Do you have a spin on s’mores that I need to know about?  Tell me in the comments!

Your favorite campfire dessert, in cookie form! This easy recipe for S’mores cookies bakes up in your oven for some marshmallow chocolate deliciousness!