Cauliflower and blue cheese team up in this easy, creamy, tangy, hearty cauliflower blue cheese soup! This is a recipe you’ll want to make over and over. 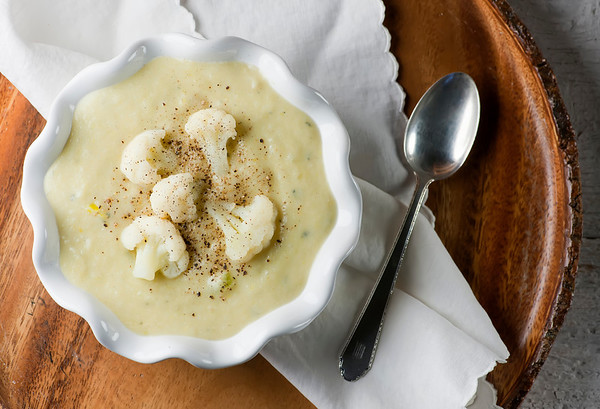 I started my serious relationship with cauliflower back a few years ago when the Southern husband and I decided to give the Atkins Diet a whirl.  Remember that one?  It promised you could eat all the bacon you wanted, so long as not one single carbohydrate passed your lips.  This sounds like heaven to me, until I got to the second day and realized that I loved carbohydrates as much as I love bacon, and the only reason I lasted on it long enough to lose a few pounds was that I realized that whipped cauliflower was actually almost as good as mashed potatoes.

I had never truly appreciated the deliciousness of cauliflower before then, but ever since I’ve been figuring out different ways to serve it up, including this scrumptious cauliflower and blue cheese soup! Ready for cauliflower soup deliciousness?  Let’s make it!

The rest of the soup is a glorious combination of butter, leeks, celery, chicken broth and milk, with a little flour for thickener.  It tastes like it has a generous lacing of cream, but no…it’s the magic of that cauliflower!  You puree the whole thing up until it is gorgeous and creamy, and then sitr in the blue cheese until it is melted and perfect.

Now ladle it into bowls, grind some pepper on top and garnish it with the cauliflower pieces.  Hand out some soup spoons and prepare yourself for some serious cauliflower deliciousness.  I heart cauliflower! And bacon.  And carbohydrates.  And cauliflower!