This easy recipe for baked potatoes with caviar stuffs a twice-baked potato with sour cream and piles caviar (or less expensive fish roe) on top for a delicious and dramatic potato that can hold its own as a main course! 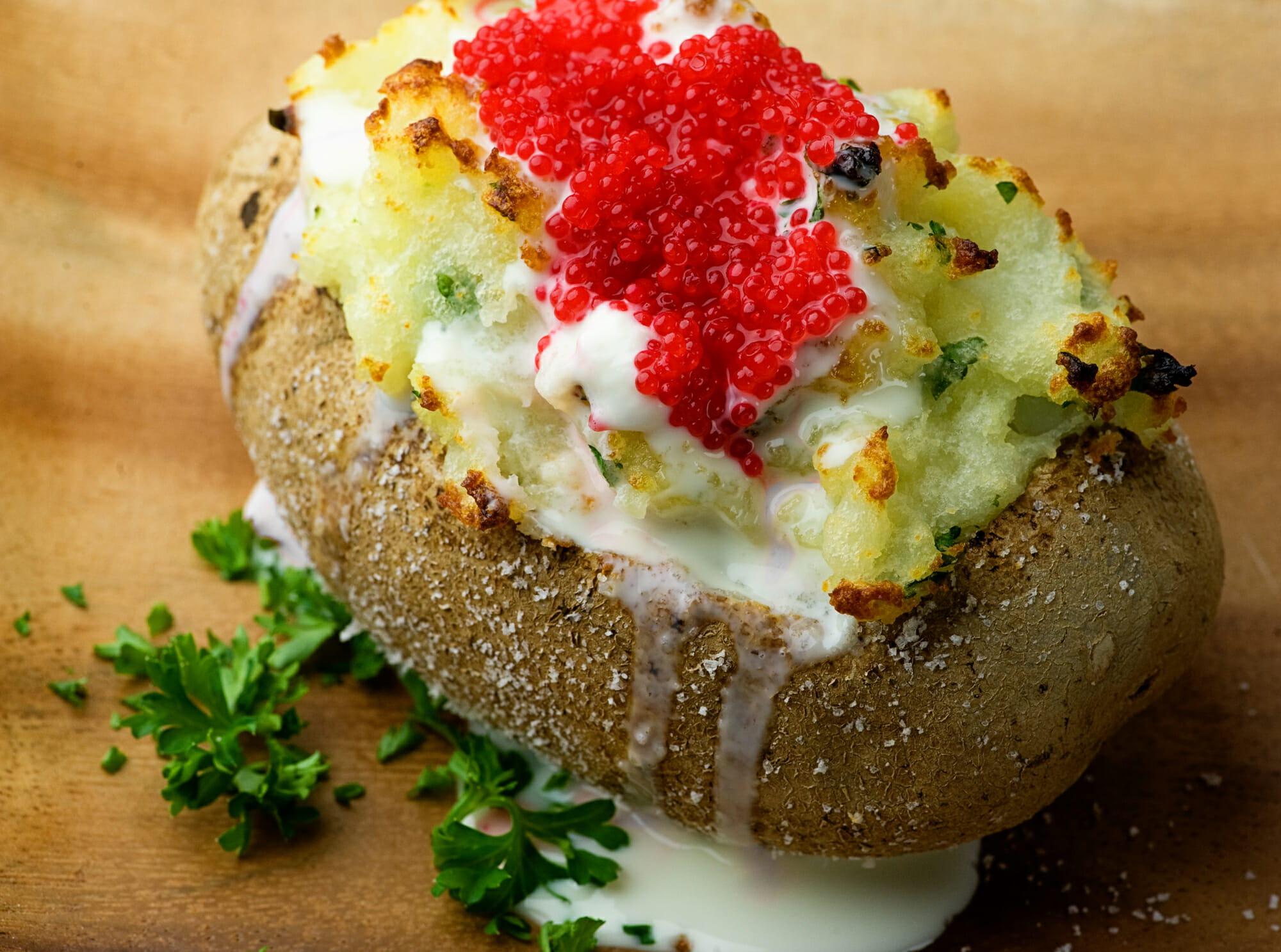 We love baked potatoes for dinner in my house. One of the teenager’s favorite meals is to take a potato and top it with cheese and a poached egg. Sometimes I contaminate it by adding broccoli, but it is still a popular supper item.

So I am always pondering ways that I can make a potato into a full-on meal, and one of the best ways to do that is to start by making a twice baked potato.

For those of you who haven’t experienced the wonder that is a twice-baked potato, you are basically getting a baked potato and a mashed potato all in one heavenly meal. You bake the potato, cool it a little, scoop out the insides, mash it up with whatever your heart desires, spoon it back into the potato shell, and bake it again until the edges are golden and crusty. Here’s a fabulous version from my friend Robyn at Add A Pinch!

here’s how to make twice baked potatoes with caviar!

In this case, I wanted to go for broke on my twice baked potato (and I don’t mean the caviar part – more on that later!). The potato is rubbed with coarse salt before it is baked so that the salt kind of bakes into the potato skin. (Potato chip-like, if you will.)

Then when the potato is nice and baked, the inside is mashed up with creme fraiche (you can also use sour cream), butter, chopped chives and salt and pepper. You stuff this incredible mixture back into the potato, bake it until it is golden, and then…take a deep breath…you top it with a little more creme fraiche and a spoonful of caviar or salmon roe.

Caviar is of course A-MAZ-ING and you can totally go for it, but fish roe is also scrumptious and very affordable.  I found a little jar of inexpensive red fish right by the canned tuna in my supermarket that worked just perfectly.  It’s called tobiko, and you’ll recognize it as the same stuff you sometimes get on sushi.  Salty and scrumptious

So the next time you are looking to make a meal out of those potatoes in your pantry, give this version a whirl!

Add some drama to your baked potatoes with a little caviar and some other elegant ingredients!