Win over all the skeptics with this recipe for hearty bacon Brussels sprouts chowder! Creamy, dreamy, easy and with bacon – who could resist? 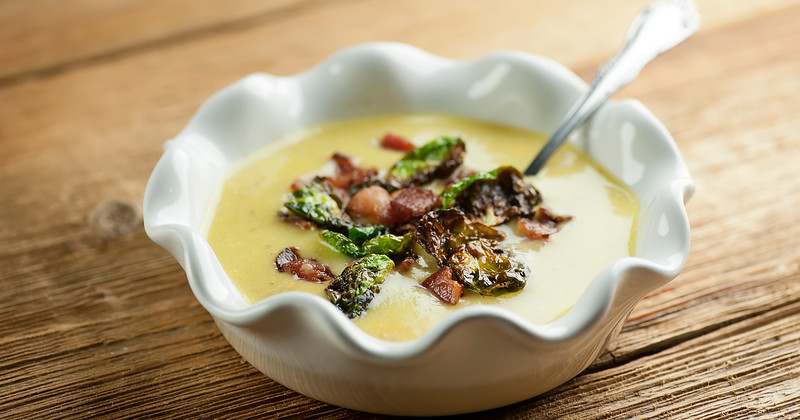 One of my goals in life is to win over even the most ardent Brussels sprouts dislikers, and by that I mainly mean the Southern husband.  There are a lot of things he will do for me, but until recently, Brussels sprouts weren’t one of them.  Then I came up with this roasted chopped version and the door was cracked open just a teeny bit, Brussels sprouts-wise…I think it might have been the cheese in there with the sprouts.

Which led me to this brainstorm: WHAT IF I ADDED BACON.  Yup.  I think you know how this ends.  Let’s make it!And then I had a further brainstorm, which was what if I pureed the heck out of those sprouts, and made them into a thick and creamy and hearty and fabulous soup?  This could work.  And so I got myself a passel of sprouts.

I mean, look at them.  How could anyone not love them??

I trimmed off the ends and peeled off the outside leaves (which luckily I saved…more on that later) and cut them in half, and I popped them in a saucepan along with some peeled Yukon Gold potatoes and some chicken broth.  Have I mentioned lately that my favorite chicken broth is the Imagine brand that comes in the box?  It is.

While the sprouts and the potatoes were simmering, I cooked up a bunch of chopped bacon until it was crispy.  My plan at the time was to garnish the pureed chowder with the bacon bits, and that definitely would have worked out just fine.  But as I was scooping out the bacon bits to let them drain on a paper towel, I noticed the pile of Brussels sprouts leaves that I had peeled off the simmering sprouts.  Then I noticed my bacon drippings in the skillet.

You know what comes next, right?

Yup, I added the leaves to the drippings and cooked them up until they were nice and crispy.  Then I pureed the cooked sprouts and potatoes and broth, seasoned it up with a little salt and pepper, and served it sprinkled with bacon and those crispy leaves. 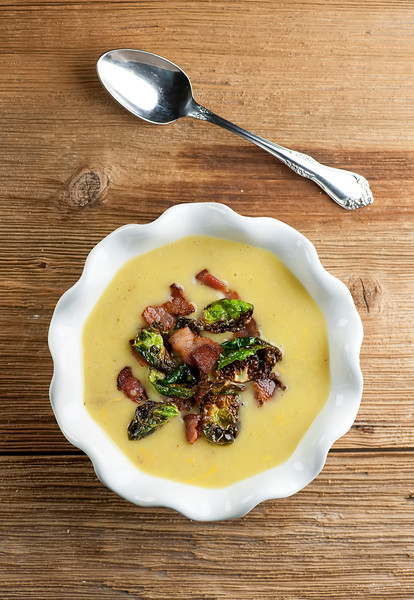 And guess who admitted that Brussels sprouts could end up being kind of delicious?