Move over tomato sauce! Pasta with buttered sour cream and bacon is in town, and the pasta is calling! Try this for your next pasta supper and get ready to be dishing out seconds.

Why we love this recipe

Sometimes when you are contemplating the inside of your refrigerator wondering what to make for supper, wonderful things can happen.

This was the case when I was contemplating the inside of my own fridge, gazing at the remains of a container of sour cream, the last couple of scallions in the bunch, a stick of butter and of course, the package of bacon that is always in there.

What happened next was pasta with a buttered sour cream and bacon sauce that is going into permanent rotation in our house!

As the idea was forming in my head, I also realized I had a burning desire to use some of the poppy seeds I discovered in my spice cabinet (now a glorious spice drawer) when we were redoing the kitchen, so they went into the mix as well.  And as offbeat as this combo sounds…it WORKED.

Sweet butter, salty bacon, tangy sour cream, a little bite courtesy of the scallions, and the I-don’t-know-quite-how-to-describe-it taste of the poppy seeds.

I used campagnelle pasta because I wanted the nice round shape to grab every drop of that sauce, but penne or ziti will work just as well.

Ingredients You Need to make this scrumptious pasta!

Here’s how To make this delectable sour cream pasta sauce!

STEP 1: Make sure your sour cream and your butter are at room temperature, and cook up your bacon until it is crispy.

STEP 2: Cook the pasta and drain it, and then put it right back into the hot pasta pot.

STEP 3: Now stir in the butter and the sour cream both at the same time until they are all melted and mixed together with your pasta.

STEP 4: Stir in the bacon, scallions (or parsley) and poppy seeds…and that’s it!  That’s all there is to it.

I dished mine into warmed plates, and for the next little while the only sound in our house was “Mmmmmmmm.”  Creamy, dreamy, tangy pasta deliciousness.

Can I leave out the poppy seeds?

Yep, they are optional…but if you happen to have any, they do add a little fun zip of flavor. You can usually find them in the spice section of your grocery store.

Can I use low-fat sour cream in this recipe?

You can! Both full fat and low fat will work. Don’t use the totally fat-free kind though – the sauce won’t have enough texture.

Pop your question in the comments section below and I will answer pronto!

Which among other things just goes to show that all that time we’ve spent gazing into fridges does eventually pay off in the end!

OTHER PASTA AND BACON RECIPES WE LOVE!

Pasta with Bacon Bread Crumbs
I think I have made my undying love for bacon abundantly clear to all of you over the years, so why it took me so long to figure out that… 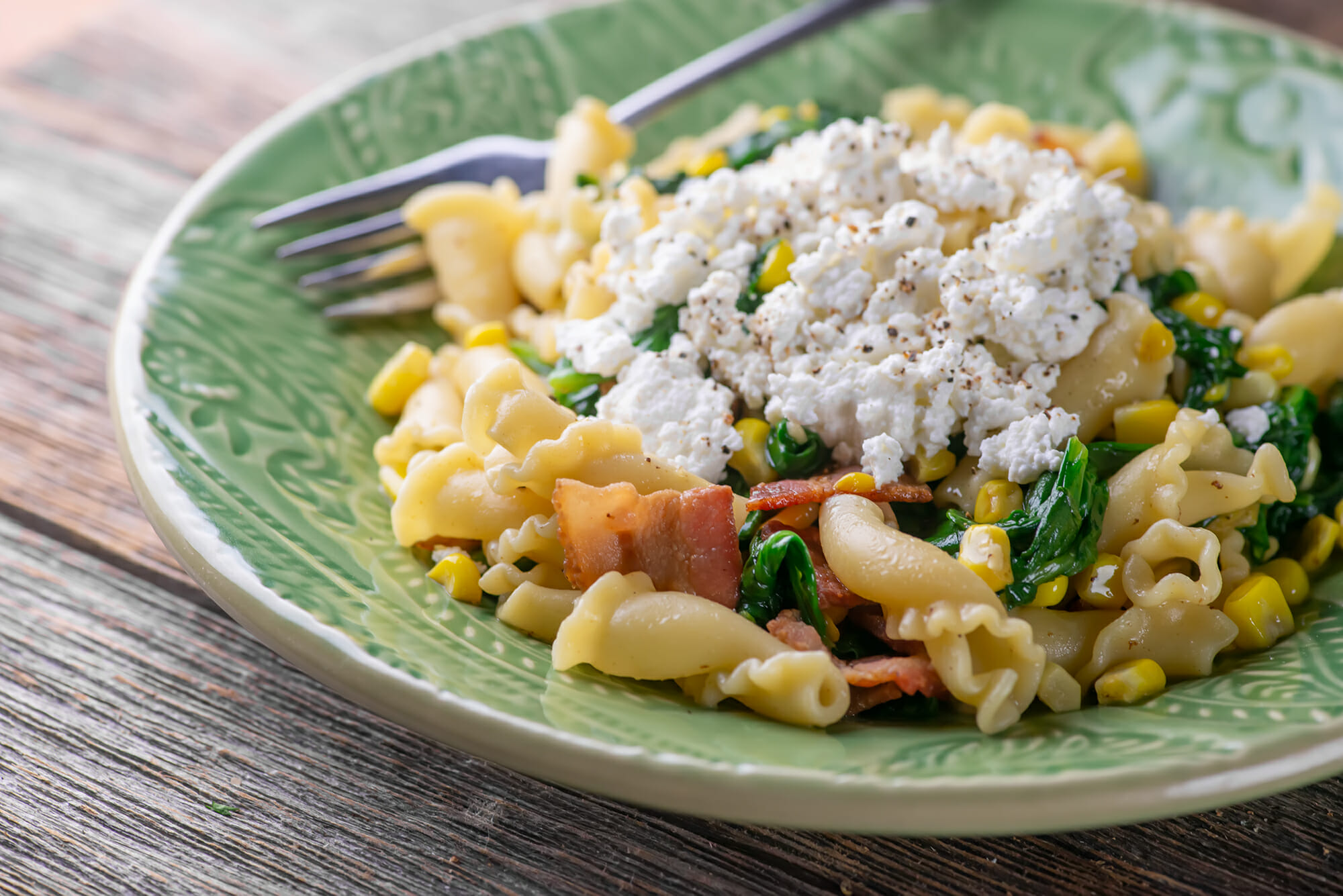 Corn and Bacon Pasta
This easy recipe for corn and bacon pasta captures the fresh flavors of the season in one quick supper. With a little ricotta cheese on top!

Could you leave us a review? 😋

If you try this recipe, we would love to hear how it came out for you! I’d be super grateful if you could leave a star rating (you pick how many stars! 🌟 ) and your thoughts in the Comments section below. Your thoughts and advice will help both us and your fellow readers. 🥰

Move over tomato sauce! Pasta with buttered sour cream and bacon is in town, and the pasta is calling! Try this for your next pasta supper.

Sour Cream: If you bring it to room temperature before you use it, it will blend into the sauce even more quickly.

Bacon: We like thick cut bacon, but you can use regular bacon or even turkey bacon for this recipe.

Scallions: Some folks (like my daughter!) don’t like the taste of these slightly spicy veggies.  You can swap out the scallions for parsley…or just leave them out altogether.