This fun recipe for spaghetti tacos is a guaranteed kid-pleaser, and the combo of spaghetti and tiny meatballs wrapped in a soft taco works for all ages!

So this all started with two things.  First was this show that I have only a dim awareness of…it is called iCarly, and it is usually playing somewhere in the background when the teenager is home, and when she isn’t watching House or Glee (two shows that I actually have heard of and like and watch.)

Until last week, I hadn’t given more than a split seconds-worth of thought to the fact that iCarly even existed in the world.

Then I read this article in the New York Times.

And it got my competitive juices flowing.  Apparently spaghetti tacos are enough of a phenomenon on this show that kids across the country are asking for them for dinner, thanks to whomever this guy is on the show. 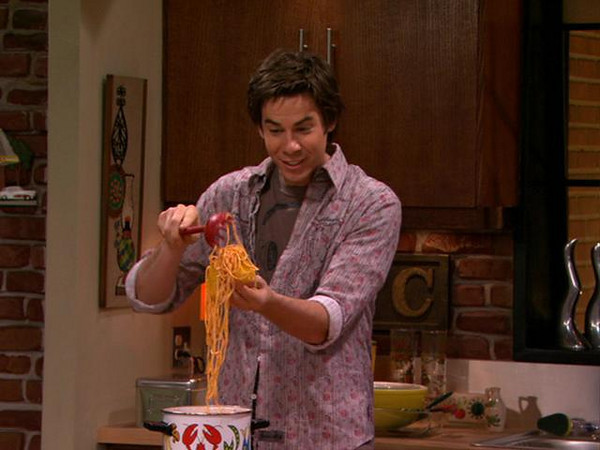 Made the traditional way, I could see why parents are scratching their heads.  But just to be totally fair, I did put one of the classic versions together. 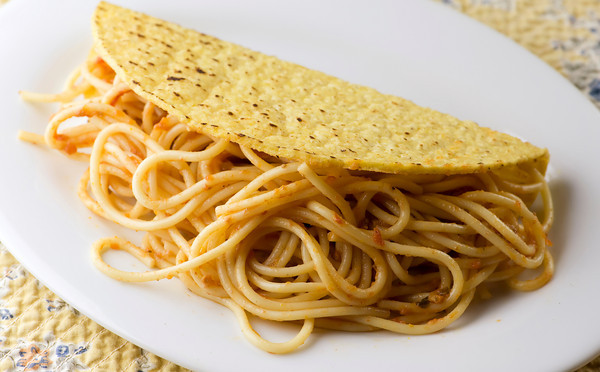 Classic – did I just say that?  Anyway, the “recipe” on the iCarly site called for spaghetti, meat sauce and a taco shell.  And a spoon.  Creative, but not as tasty as it could be.

I pondered this a while, and then it came to me.  Way back before iCarly was even a twinkle in anyone’s eye, the New York Times printed a recipe for something called Spaghetti on a Stick.

It called for making an complex rich tomato sauce, some gorgeous meatballs, and cooking up a mess of spaghetti.  You douse the spaghetti with the fabulous sauce, swirl a pile of the spaghetti around a chopstick, stick a meatball on the top of the stick to hold the spaghetti in place, wrap the whole thing in a piece of soft flatbread for easier handling, and there you have it – Spaghetti on a Stick.

I made it once, and it was scrumptious thanks to the whole sauce and meatball wonderfulness…but the whole stick thing just seemed like more trouble than it was worth.  But then this whole spaghetti taco business rolled around and a lightbulb went off in my head.

This fun recipe for spaghetti tacos is a guaranteed kid-pleaser, and the combo of spaghetti and tiny meatballs wrapped in a soft taco works for all ages!