Got some extra jelly donuts hanging around?  Use the for this delectably easy jelly donut bread pudding, which may then turn into your favorite dessert! 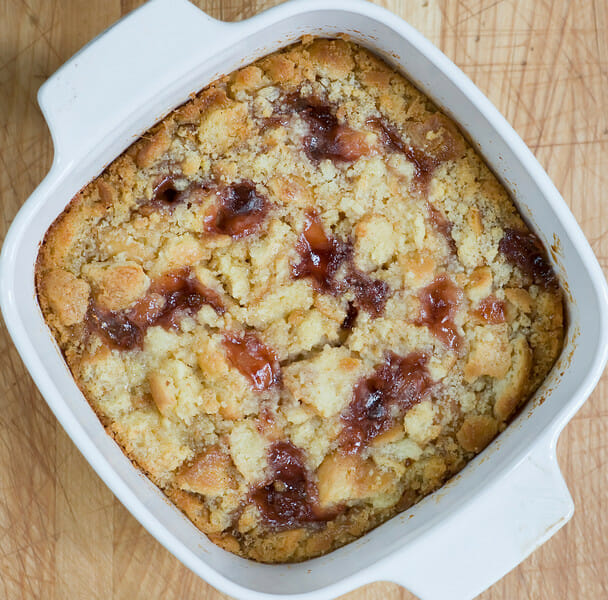 So, a few days ago I posted about my baby doughnut muffins, and just as a reminder here they are below, in all their one inch high cuteness.

Because the recipe is for muffins that you make in your mini-muffin pan, you end up with quite a few of these little darlings. And believe me, I did my level best to eat every single one of them in the time period during which doughnuts are best, which is within 24 hours of being made. Know what I mean? There’s nothing quite so sad as biting into a doughnut and realizing that it is just past its prime. The loss! The regret! The missed opportunity!

Now with these guys, I probably had about 10 or so left over. And I just couldn’t bear to toss them out. The dog graciously volunteered to take them off my hands, but she’s on a diet. And then I got a brainstorm. Bread pudding…but with the leftover doughnuts.

I put together a quick mixture of eggs, milk and sugar, crumbled up the doughnuts and stirred the whole thing together. When I poured it into my baking dish, there were tiny bits and pieces of jelly here and there…but not enough for me to feel totally HONEST about it being called jelly doughnut bread pudding. So I opened up the fridge and found some reinforcements.

Stonewall Kitchen to the rescue AGAIN. I took a few spoonfuls of this, swirled it around in the doughnut mixture, popped the whole thing in the oven, and a little while later…bread pudding heaven. I served it with a little vanilla ice cream, and oh yes.

Waste not, want not! Especially when it comes to anything with the word “doughnut”  or “donut” in it…