Brown sugar bacon and cheddar cheese pressed between bagel halves is a panini like no other! 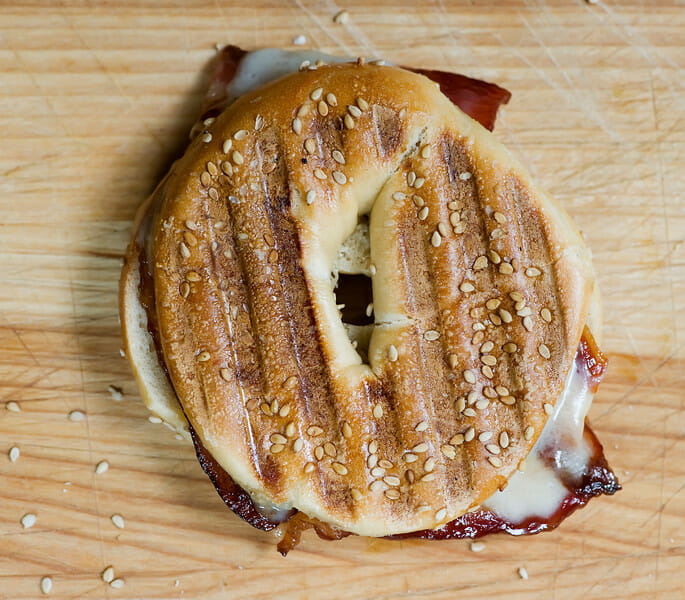 Don’t you just love it when you eat something somewhere, you fall in love with it, and you just KNOW in your heart of hearts you are going to be able to figure out how to make it yourself in the comfort of your own kitchen?

Such was the case with that bagel up there. And oh, oh, oh, that is so much more than a bagel.

It is a sesame seed bagel that has been layered with thinly sliced sharp cheddar cheese, and a generous helping of bacon cooked in brown sugar.

Then it was cooked in a panini press until the cheese is melted and the bagel is pressed down and just a little crispy on the outside. You bite into it and get this amazing combo of sweet bacon, salty melted cheese, chewy warm bagel…my heart is pounding just thinking about it.

So where was this amazingness born? There is a little bit of heaven in the middle of Grand Central Station in New York City called the Grand Central Market….

And in the middle of the Grand Central Market is this place called Dishes. Where they make things like coconut apricot bread pudding, among other things. 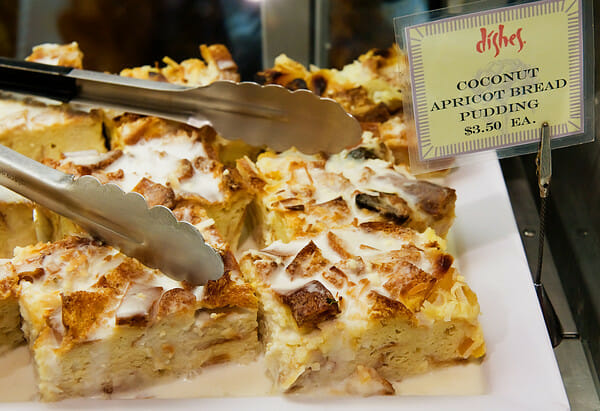 I’ve had some, and yes, it tastes just like you think it does.

If you live anywhere in the NYC area, I would stand up right now and go get me some. And yes, Dishes is the place that came up with this scrumptious bagel concoction, so no matter where you live, you can have one of these anytime. Like, today. Which is what I am recommending.

One side note about the bacon. It has taken me lo! these many years to understand that the only sensible way to cook bacon is in the oven.

It only takes about 10 minutes, and let’s face it, you are going to spend any time you save cooking bacon on the stove or in your microwave on cleaning up the bacon spatters.

Cooking bacon in the oven? No splatters.

PLUS it comes out perfectly cooked every time. AND if you sprinkle the bacon with brown sugar or drizzle it with maple syrup (my personal favorite) before it goes in the oven, it will have this caramelized coating that will make you want to sing at the top of your lungs.

Brown sugar bacon and cheddar cheese pressed between bagel halves is a panini like no other!