This tropical Cobb salad trades the usual ingredients for shrimp and fruit with a citrus dressing for a delicious and refreshing light supper!

PIN this recipe for Tropical Cobb Salad now… So you can make it later!

I do love a traditional Cobb Salad – it’s a good old chopped salad made with chicken, blue cheese, tomatoes, bacon, hardboiled eggs and lettuce, usually tossed with a red wine vinaigrette and it is ALL kinds of delicious, so when I see it on a menu I am always super tempted.

And one day, I was out to lunch and not only did they have Cobb Salad on the menu, they had a version that swapped out the chicken for lobster. I KNOW!

(This is my tropical look. HA. If only could describe the gallons of sunblock that are necessary.)

So I not only traded the chicken for shrimp (although lobster or crab would also be amazing, if you feel like breaking the bank!), but I ditched the blue cheese for a milder feta cheese, and I traded in the egg and the bacon (CAN YOU BELIEVE IT??) for some pineapple and mango and cherry tomatoes.

I kept the lettuce but I switched up the dressing for an orange lime deal, and I topped the whole thing with some crunchy salty cashews.

I don’t know if this means I can even technically call this a Cobb salad, but I’m gonna call it that anyway!

Start by putting on some Jimmy Buffet music (if you are me).

Bring a medium pot of water to a boil, add a pound of peeled shrimp, and simmer until they are cooked through, about 3-5 minutes depending on the size of your shrimpies.  Drain and run cold water over them until they are cool.

Next comes the super simple dressing!  Put the juice from two oranges and one lime in a jar along with a couple tablespoons of olive oil and a pinch of and shake shake shake until mixed.  Set aside.

Put the shrimp in a line down the middle of each plate, and put lines of chopped pineapple, mango, halved cherry tomatoes and a sprinkle of feta cheese on the side.

Drizzle dressing over the top, sprinkle with some chopped cashews and you are ready to rock!

Can I use different fruits or veggies with this salad?

Absolutely yes! Papaya, melon and cucumber would all be wonderful and would keep up the tropical vibe we have going on here.

What’s the best way to cut up a mango?

If I am being totally honest, my favorite way is to pick up some already cut up mango at the supermarket, but if you want to do it yourself, my friend Elise at Simply Recipes has a great step by step tutorial here! And while we are at it, here’s another on how to deal with a fresh pineapple.

Can this salad be served tossed?

Much as I love the drama of how a Cobb Salad looks with the pretty lines of ingredients all in a row, I do always ask for it to be served tossed – it’s just that much easier to eat. But it’s 100% fine served either way.

Can this salad be made ahead?

Yes…to a point. You can prep all the separate ingredients, but as with most salads, it’s best to do the final combination (especially the dressing) right before you serve it up, just to make sure everything is as crisp and fresh as possible.

There is one final suggestion I have more taking this tropical Cobb salad up to an even higher level of wonderfulness, and that suggestion materialized after I took this picture so you’ll just have to imagine it…

When I went back to my recipe draft for this recipe, the words “Coconut Sprinkle” were scribbled on the paper in my Southern husband’s distinctive handwriting. So the next time I make this, there’s going to be a sprinkle of lightly toasted coconut over the whole thing.

Which just goes to show you, there are still even more Cobb Salad versions possible! Happy sigh.

OTHER SHRIMP SALAD RECIPES WE LOVE!

Shrimp and Baby Potato Salad
This easy recipe for shrimp and baby potato salad is an light, easy and elegant lunch, brunch or supper! And Whole 30 compliant as well. 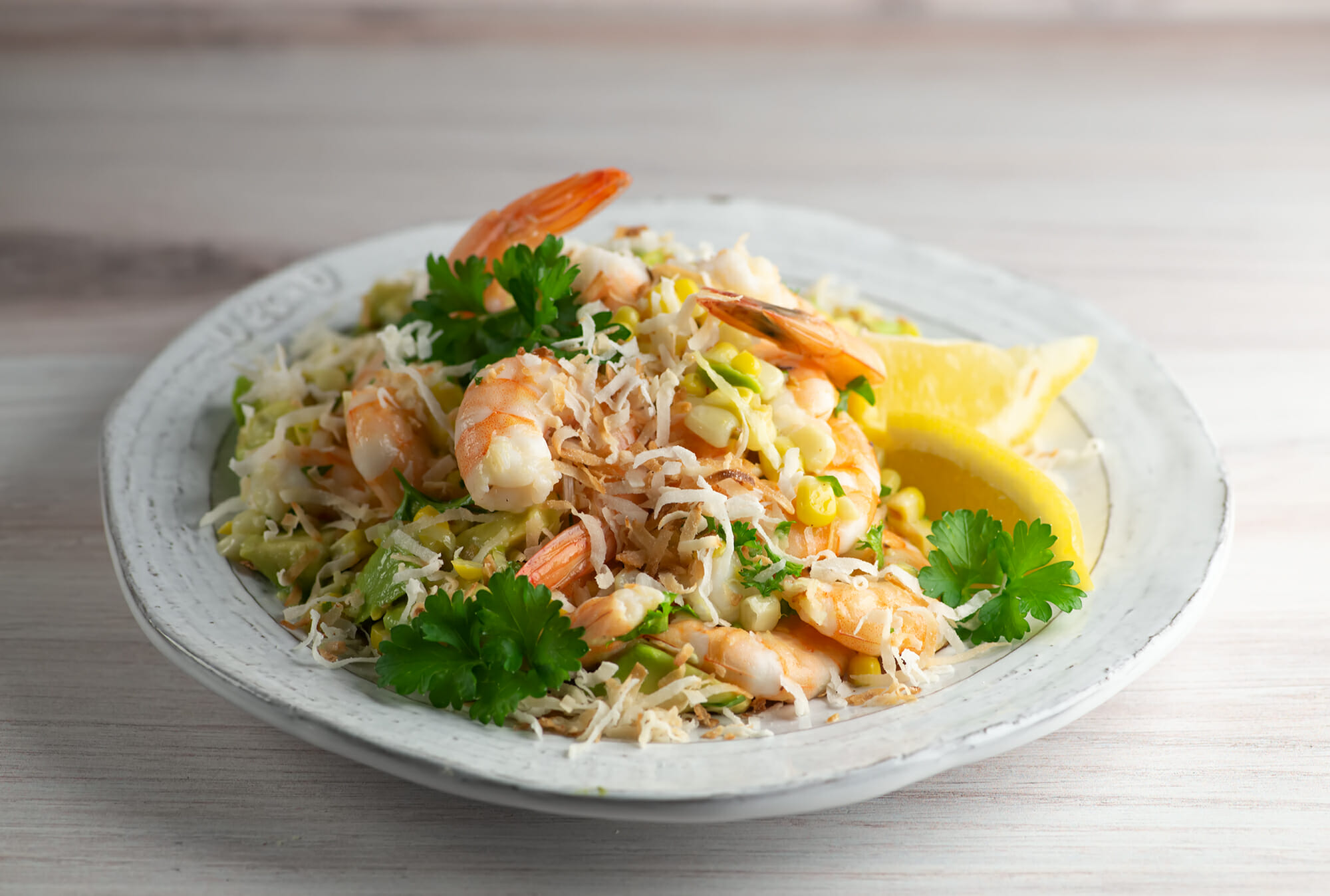 Coconut Shrimp Salad
Send your supper to the tropics with this easy and delicious recipe for coconut shrimp salad! Avocado, corn and a splash of lemon round out the flavors. 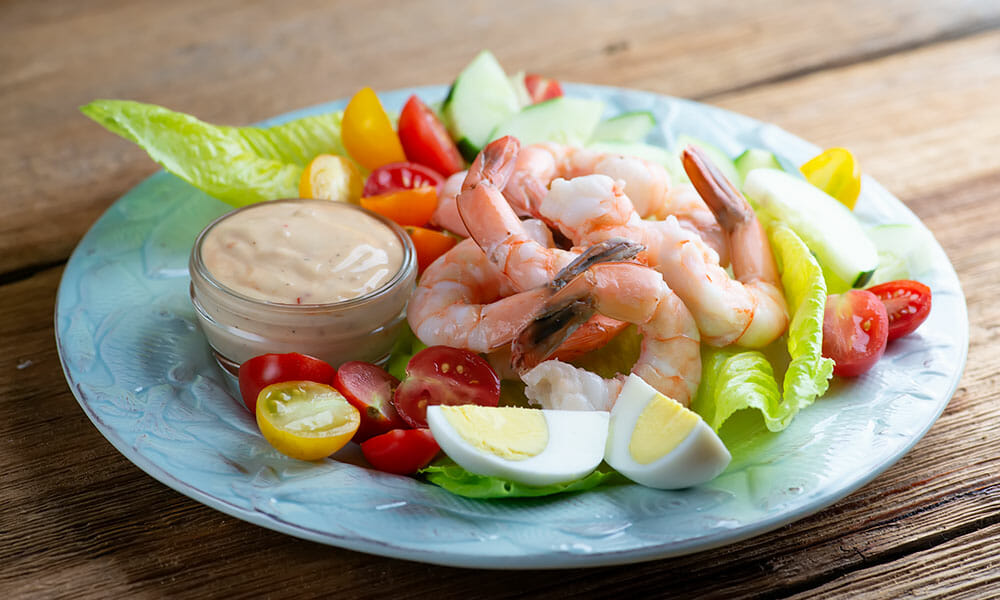 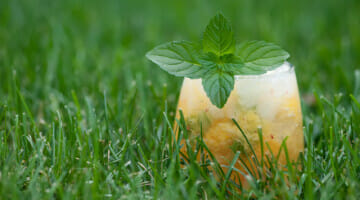 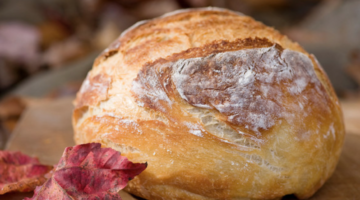 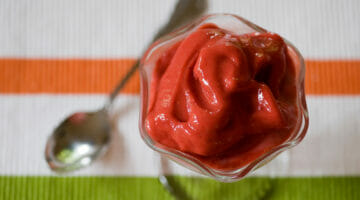 This tropical Cobb salad trades the usual ingredients for shrimp and fruit with a citrus dressing for a delicious and refreshing light supper!