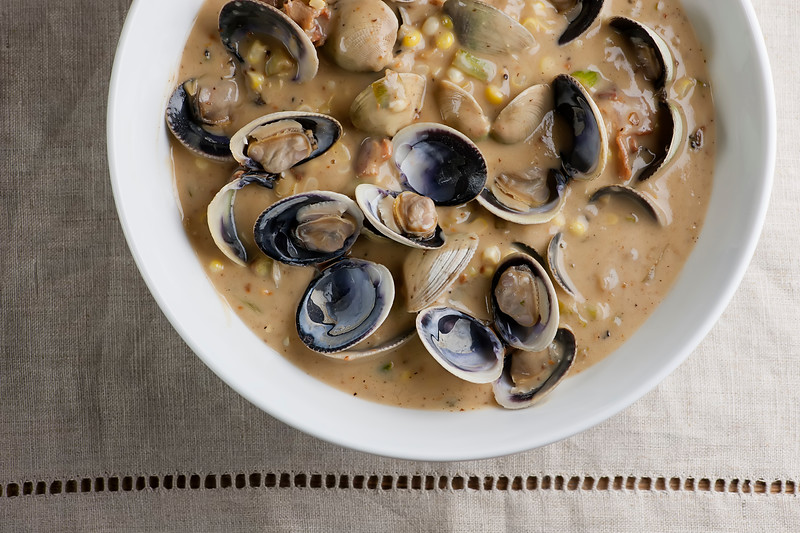 This easy recipe for bacon clam soup makes me happy on so many fronts.  It has a creamy, dreamy broth that is just rich enough to make you close your eyes with satisfaction, and just light enough that you don’t feel weighed down.  It’s chock full of fresh corn and bits of celery and scallions and chopped garlic.  It’s swimming with perfect little clams.  And if that wasn’t enough to convince you, it is laced through with crispy chopped bacon.  If this isn’t soup heaven, I don’t know what is, and it takes less than 30 minutes from walk in the kitchen to ladling into your bowl.  Let’s make it!Can I just pause for a sec and say, the inside of clam shells are so beautiful?

That beautiful swirly blue pattern…nature is an amazing thing.  I go back and forth between using littleneck clams and cockles for this recipe…whichever my market has on hand that day is what I use.  They are both smaller varieties of clams, and while I like leaving the whole clam in the soup, you can also take the meat out of the clam and discard the shells when you serve it…totally up to you.  If you leave in the shells, just have a discard bowl on the table for the empties.

Start by steaming up those clams in some water and white wine – it will take about 5 minutes for them to open (and toss any that don’t open).  Scoop out the open clams and put them in a bowl, and strain the liquid through a fine mesh strainer into another bowl.

Now cook up some chopped bacon in a deep pot until it is nice and crispy and scoop that out to drain on paper towels.  Add the garlic, scallions and celery to the pot and cook them for about 5 minutes until they soften up.  Stir in some flour, and then add that clam broth you saved. Simmer it for a few minutes until it starts to get just a little thick and then add a little bit of half and half.  Stir in some fresh corn, the clams (either right in the shell or just the meat) and the bacon.  Season things up with salt and pepper. 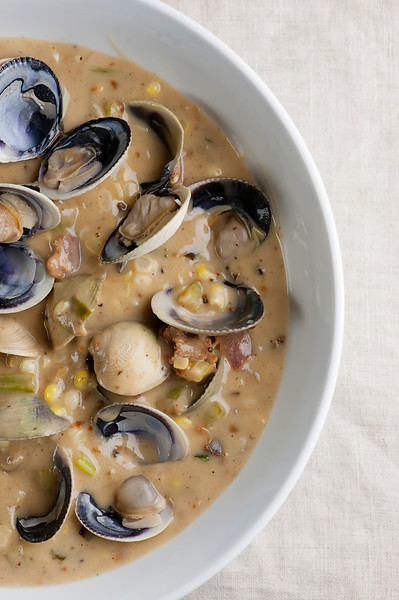 And there you have it.  Creamy, dreamy, bacon-y soup deliciousness.  Happy sigh!