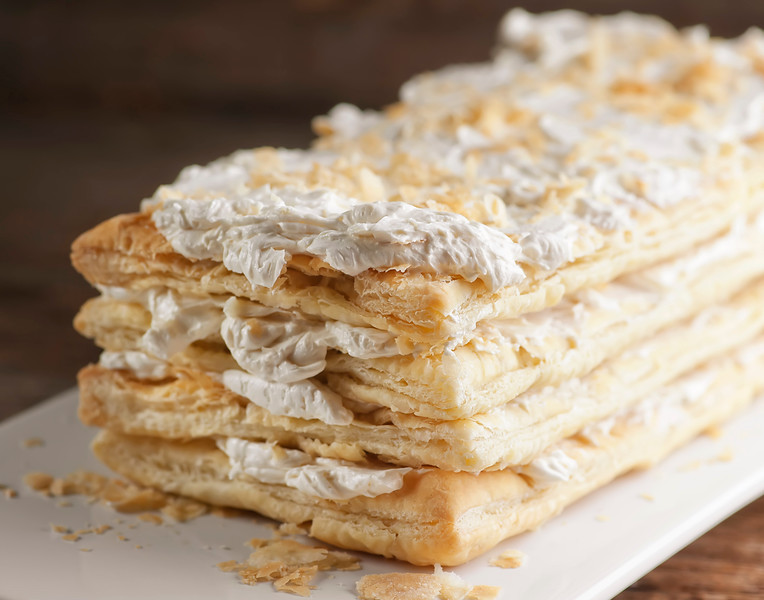 The deliciousness I am about to tell you about goes waaaaaaaay beyond that sumptuous and magically easy Russian Napoleon Cake in the picture up there.  As if a glorious cake that can be made with only four ingredients…frosting and all!…isn’t scrumptious enough, I have three copies of and absolutely captivating and exotic new novel to give away.  Signed by the author no less!  If there is anything better than a combination of creamy, flaky Russian Napoleon Cake and an exquisitely written, wildly romantic, edge of your seat book to read, I don’t know what it is.  So let’s make it and let’s read it!

First the book, because oh, this BOOK.  Set in an alternate version of St. Petersburg that is terrible and magical all at the same time, THE CROWN’S GAME tells the story of Vika, who can turn ashes into gold and Nikolai who can see through walls.  They are Enchanters who are pitted against each other in a fight to the death…the Crown’s Game…in order to win the position of Imperial Enchanter to the tsar.  And you know they are going to fall for each other, right?  And you know the heir to the Russian throne, who is Nikolai’s best friend is also going to fall for Vika, right?   I double dare you to put this one down once you pick it up.  It’s like the Night Circus moved to imperial Russia and had a baby with The Hunger Games.  IT’S ADDICTIVE.

It’s also Evelyn Skye’s first book, and she is as nice as she is brilliant, and she signed three copies for me to give away, so more at the bottom of this post on how you can scoop one of them up.

Just be forewarned that you are going to need to clear your calendar once you read the first page, because ADDICTIVE.  (Isn’t that the best feeling when you find a book that makes you feel that way?)  And speaking of addictive…

In honor of completely delicious and spellbindingly magical books set in Russia, here is a completely delicious and spellbindingly magical Russian cake.  Delicious because it is a concoction of delicate and flaky puff pastry held together with mounds of rich vanilla cream.  Magical because it takes only four ingredients and 30 minutes to make.  Yep.  Cake in 30 minutes.  I told you it was magical!

You need a box of puff pastry, which you can find in the freezer section of your supermarket,  usually where all the desserts are.  It comes in boxes of two square sheets.  Let it thaw, and then cut both squares in half so that you have two rectangles.  Pop them into the oven and bake them until they are nice and golden.  They are going to puff up while they bake (puff pastry!), but they will settle down a little as they cool, and you will also press them down a teeny bit so that you have four pastry layers that are about 1/2 inch thick.

While the pastry is cooling you can make the sinfully decadent pastry cream, which is 2 sticks of butter whipped with a can of sweetened condensed milk and a teaspoon of vanilla.  So. Good.  Once the pastry has cooled down enough to handle, spread the first rectangle with a quarter of the cream.  Place the second rectangle on top and repeat.  The top gets frosted with the remaining quarter of the cream.  Don’t worry that the pastry is going to be a little crumbly – I like to sprinkle those crumbs on the top of the cake so I don’t miss a single morsel.   And that, my friends, is magically that.  Cake done!

Now as for the giveaway, all you need to do is leave me a comment below telling me what your current can’t-put-it-down book is, and I will randomly pick three lucky winners next weekend to get a signed copy of THE CROWN’S GAME.  This way we all win, because in addition to those three lucky ducks, all of us will have a fabulous list of must-read books too!

And in the meantime…Russian Napoleon Cake.  So much yes.

This giveaway is now closed…but you can still make Russian Napoleon Cake!