Take everyone’s favorite avocado appetizer to even more delicious heights with this recipe for easy pineapple guacamole!  Who knew guacamole could get even better? 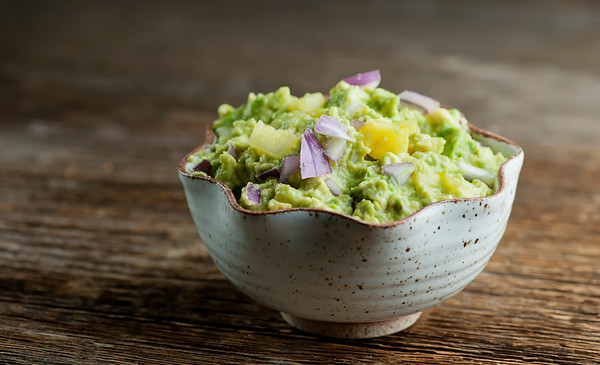 If you dropped me on a desert island and told me I could have one and only one nibble type of thing for the rest of my life, I would pick BACON.  But right after bacon, I would pick creamy, dreamy guacamole with its combo of silky avocado and tart lime juice and salt (which as far as I am concerned are the only things you need to make classic guac, thank you very much).

But since I have staked my reputation of taking perfectly innocent classic recipes and messing with them, I decided to up the excitement in my kitchen, guacamole-wise, by adding in some pineapple and a little chopped red onion and you know what?  You CAN teach old classic guacamole new tricks.  Let’s make it!

The only other thing I added to this magical mixture was a pinch of cumin, mainly because I wanted there to be a fair fight between the bite of the onion and the sweetness of the pineapple.  A little spicy cumin was just the ticket, and in no time I had a bowlful of sweet and spicy avocado deliciousness that the Southern husband and I polished off in no time.

However, that left us with the question of what to do with the rest of the pineapple.  You can make this with canned pineapple, but it is SO easy to chop up your own pineapple, and there is something so satisfying about putting a pineapple in your shopping cart?  Try it.

But as I mentioned, as this recipe only calls for about a half a cup of chopped pineapple, that leaves you with a whole lot of wonderful sweet pineapple.  Now, you COULD make pineapple shrimp gazpacho, or pork and pineapple tacos…but frankly I was so head over heels with this new guacamole that I just went ahead and made it again.  And spooned it over sliced grilled chicken.

Which may have ruined all other chicken recipes for me, at least until I get this recipe for easy pineapple guacamole out of my system.  I’ve already warned the Southern husband that we may need to buy avocados and pineapples at Costco for the time being.  For, you know, VOLUME.

So go ahead – pineapple up your guacamole!

This guacamole is great both as an appetizer or spooned over grilled sliced chicken or steak!