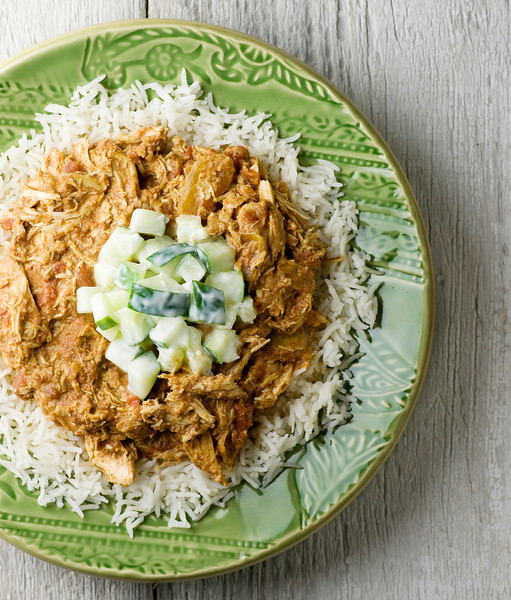 I’ve written about wonderful, spicy, delicious Chicken Tikka Masala before…I have a recipe for this dish that involves a long, lazy Sunday afternoon of cooking and ends with a classic version of tikka masala.  But what if you absolutely NEED to have chicken tikka masala on a Tuesday evening, and instead of a long lazy weekend day you have a jam-packed with meetings and errands and other stuff type of weekday?  That’s when your slow cooker (and this super-simple recipe!) is your best friend, because Chicken Tikka Masala CAN be yours on a busy Tuesday.

The most challenging part of this tikka recipe is finding the one essential ingredient that makes chicken tikka masala, well, chicken tikka masala, and that is garam masala.  Don’t panic…that’s a combo of spices that you can find either in your supermarket (if yours is better stocked than mine) or by clicking here.  Or you can do what I do and call my mother, who has yet to say “no, I don’t have any of that” when I ask her for obscure ingredients.  Or last but not least, you can make your own…I’ve never done that (because my mother always has garam masala right at her fingertips) but here’s a handy link if you want to try.

Once you have your garam masala, you are a few more ingredients, one slow cooker and about 8 hours away from tender, spicy chicken wonderfulness.  It’s literally as simple as tossing the ingredients into the slow cooker, going about your busy day, and then coming home to an almost fully-finished tikka masala dinner.  All you’ll have left to do is shred the chicken (and since it spent all day in the slow cooker it will be so tender it will pretty much fall apart on its own), stirring in a little cream and making some rice to serve it with.  I made a quick topping of cucumber mixed with sour cream to go with it…that part is totally optional but really good!

So the next time you get a craving for chicken tikka masala in the middle of a crazy week, you can say Yes I Can!  Because we all need some tikka masala on Tuesdays sometimes.