Every weekend when I put together my menu for the upcoming week, Southern cuisine is always in the back of my mind.  That might have to do with the fact that the Southern husband is lobbing suggestions at me a mile a minute, and lots of them have the words “grits” and “okra” and “I remember that Granny used to make…” in them.  So recently I decided to go for something he loves that I have never made before.  Fried oysters with homemade remoulade sauce, all tucked up into warm flour tortillas.

Now, one of the things you need for this recipe is, well, oysters.  And I was mulling out loud where I might be able to find shucked oysters, which apparently is not a good thing to say to a Southern man, because he looked at me like I had lost my mind for a minute.  “I can shuck oysters just fine,” said he.  Which is how we ended up with a pile of these later that day. 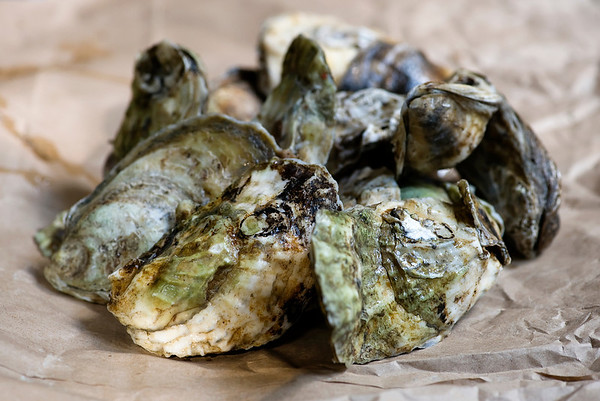 Aren’t they pretty in their oyster-ish way?  Like a little bit of the ocean right there on my kitchen counter.

When the time rolled around to make the oyster tacos, I gave the Southern husband the heads-up that oyster-shucking time was nigh.  And then I got the first inkling that this might not be as easy as it had been advertised when he showed up in the kitchen with his pocket knife and picked up an oyster and turned it over a few times.

Hmm.  I may be just a Northern girl, but I thought I had remembered somewhere that shucking oysters can be a little bit of a messy business.  And sure enough, little bits of oyster shell starting winging their way through the kitchen.  And the oysters weren’t being, well, cooperative.

“Honey?  I found this video about shucking oysters on YouTube if you want to watch?”

This was apparently the oyster-shucking equivalent of suggesting that we stop and ask directions in those pre-GPS days of being hopelessly lost somewhere.

Not a chance of happening.

So the teenager and I retreated to the edges of the kitchen until six of the twelve oysters gave it up.  The other six seemed to have other ideas, at which point the Southern husband scooped them up and headed for the garage, and came back about 10 minutes later with the remaining six oysters all nicely shucked.  I think there might have been a hammer involved, but I’m not asking any questions.  To this day, I still don’t know what happened between him and those oysters.  :)

Anyway, now that the shucking was done, we got down to the business of frying those babies up.  They get dunked in a mixture of cornmeal and flour and a couple of other things, and fried oh-so-quickly in a bath of piping hot canola oil.  Once they are nice and golden, they get popped onto warm flour tortilllas with a little chopped lettuce and tomato and a generous spoonful of an easy homemade remoulade sauce.  And I can tell you this for sure: one bite of a warm oyster taco with creamy spicy remoulade sauce and all your oyster-shucking and assorted other worries will disappear.

(Now, if anyone knows where I can buy shucked oysters, please give me a holler!)

For the Remoulade Sauce

For the Oyster Tacos

For the Remoulade Sauce

For the Oyster Tacos