Slow roasted beef and a tangy sauce make turn into the world’s most satisfying barbecue sandwiches! Perfect for your next tailgate or picnic. 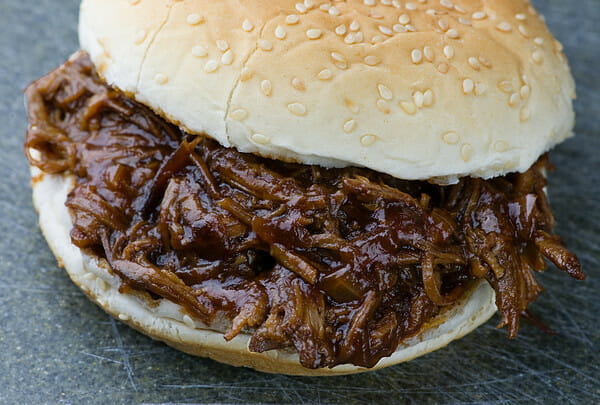 Lots of you have asked me what was on the menu at my house for the Super Bowl, and I know it is already practically baseball season now, but better late than never….I ended up being a big winner on Super Bowl Sunday because my awesome group of family and friends came with just about everything anyone could possibly want in terms of delicious food that could be eaten while shouting at the television screen.

Here’s what we had:

BBQ Sandwiches, as seen above. Both the shredded beef brisket bbq and the fantastic sauce was made by my dad, who is a long-time, unswervingly loyal Redskins fan, and my hero. Recipe below — thanks, Daddy!

Coleslaw, made by yours truly. We like the vinegar-based kind as opposed to the really creamy kind. It’s awesome with the BBQ sandwiches. You can even put a spoonful of it ON your bbq sandwich, if you are really wild and crazy.

Monster Cookies, made by my friend Linda. There almost aren’t words to describe the wonder of these. People who don’t even like dessert loved these cookies. People who DO like dessert practically rioted over them.

Brownies, made by my soul-sister Angie.  Sadly, you will never ever know how to make these spectacular brownies, because she won’t give me her secret recipe, despite all my shameless begging and pleading and weeping. But MAN are they good.

That’s some of it…there was more, if you can believe that. But those were the main events, headlined by that awesome barbeque. We kept the meat warm throughout the game in one crockpot set on low, and the sauce in another set on low.

My particular method for assembling my sandwich is to grab a big hunk of the shredded beef in tongs, dunk it into the sauce, and nestle the dripping deliciousness right onto my nice soft sandwich roll. But you feel free to be you, in terms of sandwich assembly.

So there you go, Super Bowl course number one. And don’t forget to check out the Monster Cookies if you need dessert.

Slow roasted beef and a tangy sauce make turn into the world’s most satisfying slow cooker barbecue sandwiches! Perfect for your next tailgate or picnic.